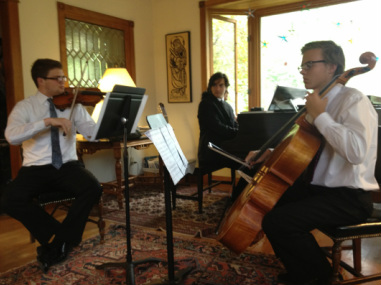 Times:  One-hour coaching sessions will be scheduled between 8 am and 12:30 pm at Kalo Latu’s piano studio.  Each group will practice together on their own for 1-1.5 hour either before or after the coaching in a nearby chapel.  Specific times will be assigned once registration forms and fees are received.

Description: This summer students will have the exciting opportunity to learn and perform chamber music with their peers.  Students will learn valuable skills such as ensemble playing, communication, cueing, listening, and balance that cannot be taught in a typical private lesson.  Last but not least, chamber music is fun!

-Each musician will be placed in a piano trio (piano, violin, cello) with students similar in age and level.
-The trio will meet to rehearse on their own for an hour/hour and half everyday, Monday through Friday.
-Daily sessions will be coached by a piano, violin, and cello coach (Kalo Latu, Megan Boyle, and Yeagi Kim Broadwell).
-Each ensemble will receive private instruction Monday through Friday.
-Master class will be held on Thursday and the session will conclude with a recital Friday evening.

Student musicians are required to have the music thoroughly learned before the session.  Individual parts must be solid before beginning work with the other musicians.  Not having to worry about learning notes or rhythms of the individual part allows the musician to concentrate on the "team" or ensemble aspects of playing with others.  Students are required to take the music to their private teacher during the month before the session for individual coaching and assistance with their part.

You will be contacted no later than June 20/ July 31 with your coaching time assignment and piece(s).

Yeagi Kim Broadwell (Violin) is a native of South Korea, and has studied and performed in Korea, Russia, the Netherlands, Belgium, England, and throughout the United States. She attended and graduated from the Novosibirsk National Specialized Music School in Russia, after which she attended Brigham Young University, where she received a full scholarship and completed her Bachelor of Music in Violin Performance. Yeagi received her Master's of Music at the Rotterdam Conservatory in the Netherlands. While in Europe, she performed in such acclaimed halls as the Concertgebeouw, De Doelen, and the Queen Elizabeth Hall. Her teachers include Vesna and Igor Gruppman, Olga Marchenko, David Park, and Judd Sheranian among others. Yeagi is currently pursuing her Doctorate of Musical Arts at the University of Utah, where she has served as a concertmaster of Utah Philharmonia and Utah Chamber Orchestra.

Megan Boyle (Cello) is a native of Tucson, Arizona.  She began piano studies at age 4 and cello at age 8 with Mary Beth Tyndall.  Prior to college, she participated in numerous orchestras and festivals for both piano and cello in Arizona and across the United States.  She received a Bachelor’s degree in cello performance from BYU where she studied with Gayle Smith and Julie Bevan.  Her other principal teachers include Gordon Epperson and later Hans Jorgen-Jensen at the Meadowmount School of Music.  She has performed as a soloist with the BYU Chamber Orchestra and has performed in master classes for Jeffrey Solow, Emilio Colon and Peter Rejto.  Megan was formerly cello faculty at Snow College and BYU.  She is a registered Suzuki Teacher and has completed teacher training with David Evenchick, Carey Cheney and Catherine Walker.  She maintains an active private studio of over 50 students and coaches beginning through advanced cello choirs and other chamber ensembles.  Many of her former and current students have gone on to pursue degrees in music and have been awarded music scholarships to universities, camps and other music programs.

Kalo Latu (Piano), a Utah native, received her Bachelors and Masters degrees at Brigham Young University where she studied with Dr. Irene Peery-Fox, Dr. Parley Belnap, and Dr. Don Cook.  As first prize winner at the Gina Bachauer International Piano Ensemble competition,  and several other Utah competitions including the State Fair Music competitions, Latu has appeared as a repeat soloist with several orchestras throughout Utah.  As a chamber artist, in piano trios, quartets, and quintets, Latu has performed both in masterclasses for Arnold Steinhardt (founding member Guarneri Quartet) and Bernard Greenhouse (founding member of the Beaux Arts Trio) and in chamber music concerts and festivals.  Latu has taught for fifteen years and her students have been prize winners in local competitions and festivals.  Her students, at the invitation of the Foundation of Soong, did a concert tour of four major cities in China where their concerts were broadcast on CCTV, China's largest and main television station. Her students frequently perform and participate in both local and state community events.